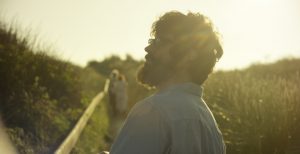 Notes on Blindness, a first feature that builds on their shorter film from director Peter Middleton and James Spinney is a beautiful, haunting and uplifting film about one man losing his vision, and what that means to him, his family, and his place in the world.

When John Hull, a professor at Birmingham University started to lose his sight, he questioned it, and the impact it would have on him and his relationship to his family, work and, ultimately, his place and belonging in the world. He decided to record this journey onto audio cassettes, and document his life in the ever darkening world.

The key here from a film making pint of view, is the focus on the audio diaries that Hull keeps, a jumping off point for the film; as actors lip sync, perfectly, over the words to create visuals for the audience, and show, not just tell, John’s slow decline of sight and not just the impact of it on him, but also the impact on those closest to him, and the world he inhabits.

Like recent films such as The Arbor, or even The Imposter or Dreams of a Life, Notes on Blindness is documentary by genre, but by no means traditional in form. The films use of using actors, depicting Hull’s life, shows, as well as tells, the story, which in turn brings a new level of storytelling to the forefront, and brings a greater emotional depth to the story. This technique allows the story room to breathe, adding greater depth as well as stunning imagery.

Although this could easily be a sombre experience, the skills of the filmmakers allow John’s story to shine, using stunning images, and clever filmmaking techniques to slow his plight. The imagery is striking, beautiful and evocative; leaving a lasting emotional hold on the viewer. A story that demands to be seen and shared; Notes on Blindness is one of this year’s great British films.